Time to Stop the Bullies 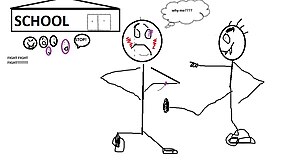 It hurts to be bullied. It hurts the spirit and the body, the confidence and self-worth. No one should have to live in that kind of fear or circumstance. So what are we going to do about it?

With the advent of the internet, bullying’s primary setting isn’t merely in schools and playgrounds anymore: it also thrives in the technological halls of the cyber world. It’s pervasive. There are two types of bullies:  popular, well-connected with social power, overly concerned about maintaining that popularity, and liking to be in charge. The second type tends to be the kid who is more isolated from their peers, easily pressured, has low self-esteem, is less involved in school and doesn’t easily identify with the emotions or feelings of others.

Those at risk of being bullied are kids who are perceived as separate or different from the norms or social mores of our culture. They are often seen as weak, they tend to be anxious or depressed, they are less popular, and are often viewed as annoying or provocative. As a result, these kids are more susceptible to falling prey to bullying behaviors, behaviors which aren’t always as black and white as we once thought. Here are some examples:

Keep in mind, the most reported bullying happens on school grounds: in the hallways and on recess yards. It also occurs travelling to and from school. But nothing is really sacred. Cyber bullying is growing like wildfire as kids become increasingly savvy with technology.

It’s common for kids who are being bullied not to tell anyone because they may be afraid of the vengeful repercussions from the bullies themselves. Bullying is, in its very nature, a power structure built on dominance and fear-driven control. When someone is being terrorized by fearful tactics, it takes an incredible amount of courage to seek help. In the mind of the bullied, it’s a risk they are not always willing to take, so instead, the fear gets internalized, making its appearance in various ways:

Despite the fact that many schools have implemented anti-bullying policies, the administration doesn’t always carry them out in the most effective ways. I’ve experienced a principal in my son’s school who typically punishes the victim along with the bully, creating situation of victim-blaming, which encourages the bully and fundamentally creates shame in the bullied. In this particular case, a child ended up reverting inward and internalizing the fear, ultimately trying to handle it on his own. As a result, the persistent concern about being called a snitch or weak drove this child’s efforts toward self-directed management of the situation. Unfortunately, this is a perfect situation for the bully, and in many ways, this maintains the bully’s position of control. Not surprisingly, the bullying hasn’t stopped.

As parents, we need to find safe, productive ways to stop bullying behaviors. We can:

This is also a great opportunity to take your kids to see Bully or go see it yourself if you can. It’s a limited engagement, but one you don’t want to miss. Time to take charge and stop bullying in its tracks.

For more information and for resources, check out: