What You Need to Know About Text Bombing 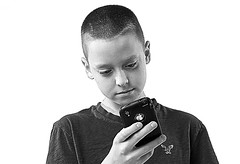 are you really laughing out loud? (Photo credit: MrPessimist)

The concept behind text bombing is to save time: you can send mass texts out to multiple people telling them where to meet you, et cetera. Ultimately, it was designed to be a cheap tool for efficiency. According to this latest from Huffington Post,  text bombing is the latest technological tool used by cyberbullies to go after their victims. The sender can be anonymous and the apps can be programmed to auto-send persistent, negative messages. Text bombing someone means you are sending 1000-10000 text messages to the same person in the same day, and it can go from being simply annoying to cruel. In the banal sense, one could look at text bombing as the equivalent of crank calling someone. Unfortunately, in the wrong hands, text bombing has sinister underpinnings.

Imagine repeatedly receiving a text message saying, “die” or “no one likes you,” in the same day.  The victim of the text bomb has to endure receiving the same hateful and/or degrading message time and time again, experiencing high levels of stress, anxiety, and even depression. Unless you have a means of blocking the text messages, there’s really no way to stop the barrage of hate. You are in a relentless technological loupe.

Alas, you can protect yourself!  You can download one of these spam-blocking apps, which allow you to block numbers and texts from coming in:

For the Android, you can use Text Bomb Defender or Anti SMS Bomber Pro.

For the iPhone, you can use NumberCop.

Parents, if you are worried that text bombing may be an issue for your child, look for the following: