Smoking: Not So Cool Anymore 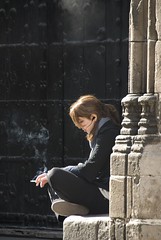 When I was growing up, smoking was emblematic of the Outsiders or James Dean or the Marlboro man. It was a symbol of “cool,” or of being a rebel or a badass. I grew up with tobacco ads emblazoned upon billboards across Los Angeles and littering the pages of magazines. What could possibly be wrong with smoking if it looked so cool, right? Wrong. Did you know that the three men who held the role of the Marlboro Man eventually died of lung cancer, and the infamous brand ended up with the nickname “Cowboy Killers“?  Still, it wasn’t until 1999 that smoking billboards were ultimately replaced with anti-smoking ads, despite efforts toward the prohibition of tobacco advertising building for years.

Finally, in 2009, the Family Smoking Prevention and Tobacco Control Act went into effect. The Act requires placement of new warnings and labels on tobacco packaging and in tobacco ads; its ultimate goal is to deter minors and young adults from using tobacco products. Tobacco companies are also required to seek FDA approval for new products. But why am I talking legal Acts and advertising,  or reminiscing about the Marlboro Man? Because statistics gathered from a recent are showing us that teens are, in fact, finally smoking less! The full results of the survey done by the National Survey on Drug Use and Health can be found here.  However, I’ll give you a brief window into what the results showed. Perhaps those terrifying, graphic warnings are finally starting to work.

According to this study:

Teen perceptions of the danger of smoking are increasing:  2 in every 3 adolescents recognize that smoking is dangerous. This is a good thing. It would appear that smoking is no longer seen as cool. If anything, smoking has been relegated to outside locations, where smokers are allowed to smoke in small, outdoor spaces, which are a specified distance away from any doors. Smoking in this day and age would really just be a pain in the rear. The recent laws and views toward smoking have made it really a challenge for those who want to indulge. At this point, why bother?