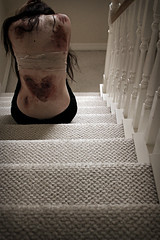 Teen dating is rite of passage. It’s part the induction into young adulthood, and the ground on which we begin to build the foundations of having a healthy relationship. Unfortunately, “healthy” isn’t always part of the equation, and as we come to the end of February, National Teen Dating Violence Prevention and Awareness Month, I thought it apropos to talk about what happens if/when a relationship goes awry. As if navigating adolescence wasn’t hard enough as it is, right?
Domestic violence is an insidious beast. It’s not always obvious to outsiders and can often go undetected until it’s too late. There’s a huge element of shame associated with being on the receiving end, as well as an untenable fear of incurring further abuse. Truthfully, it’s another form of bullying, and a bully’s usual tactic is to threaten their victim with fatalistic consequences, ultimately forcing the victim to suffer in silence, isolate, and not ask for help.

Some signs that someone may be experiencing dating violence are:

Signs that your dating partner may eventually become violent:

Because teens often romanticize intimate relationships (particularly this generation, which has grown up watching glorified, sexualized violence in television, film, and media), there is an inherent  belief among boys that their masculinity is defined by aggression, while girls often see their role as problem solver and passive. These attitudes fundamentally perpetuate the problem of gender inequality which so often leads to the abuse of power and the use of control in relationships.

If you are experiencing any facet of dating/domestic violence, please seek help. There are anonymous, 24-hour helplines available to you, your teachers and parents will help you, you just have to speak up. You don’t deserve to be abused. Love is respect, and it certainly shouldn’t hurt.