What You Need to Know About Sexting 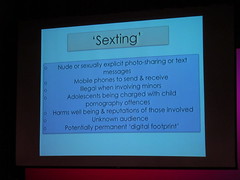 Sexting is the act of sending sexually explicit photographs or messages via your cell phone.

The Internet is a vast, unchartered space. Technology has expanded so much that our means of communication has forever changed to include text messaging, emailing, instant messaging, video calling, and emailing. As a result, we are faced with things like sexting. One of the most troublesome things about sexting is its wide reach. A text message can circulate remarkably fast and beyond the control of its original sender.

A recent study has shown the following:

Notably, researchers at University of Texas Medical Branch discovered teens that sext are more likely to engage in sexual behaviors:

From the perspective of the criminal justice system, teen sexting can fall under the child pornography statutes[3]. For example, a teen that takes a nude photograph of themselves has created child pornography; as soon as they hit “send” they have distributed child pornography. The significant danger lies in the fact that these images inevitably get passed around and often spread like wildfire across a school. This creates an environment rife with bullying, shaming, exclusion, and in some cases, suicide: An 18-year-old high school graduate committed suicide after a nude photo she sexted to her boyfriend was also sent to hundreds of teenagers in her school.[4]

Thus far, only 17 states have sexting laws in place.

Here’s what you can do to prevent sexting:

[1] The National Campaign to Prevent Teen and Unplanned Pregnancy and Cosmogirl.com, “Sex and Tech: Results from a Survey of Teens and Young Adults”;https://www.thenationalcampaign.org/sextech/PDF/SexTech_Summary.pdf