Troubled Teen Introduced On “The Closer” 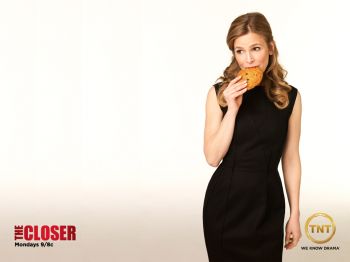 The Closer, starring Emmy-nominated Kyra Sedgwick as Brenda, has introduced a new character this season- a troubled teen niece. Charlie (the niece)is the troubled teen who has been flown out to Los Angeles to stay with her Aunt Brenda because her parents are at their wits’ end. She has been acting out and has already gotten into trouble with drug use. Last week’s episode had Charlie receiving drugs in the mail from her friend back home. Brenda’s husband, Fritz, freaks out because a) he is an FBI agent and b) he is sober in the program of Alcoholics Anonymous and having drugs in his home is not something he will tolerate.
I am curious to see how the show will handle Charlie’s issues. As of right now, none of the characters on the show feel like they can help Charlie, which is how many parents of teen drug addicts feel. She is irritable and secretive and clearly struggling with drug abuse. Of course I’m thinking, “I know that game…send her to Visions!” It will be interesting to see if they address the issue of addiction head-on. I think it would be a great venue to promote the idea of teenage recovery and treatment. There are plenty of shows that depict troubled teens, but none that show treatment and recovery for teens. I would love to see Charlie get a chance at recovery, so that the average American might see that teen recovery is entirely plausible. If your teen is struggling with adolescent substance abuse and you feel at your wits’ end, there is help available. No one has to deal with teen addiction alone.