“Nothing Tastes As Good As Skinny Feels!” 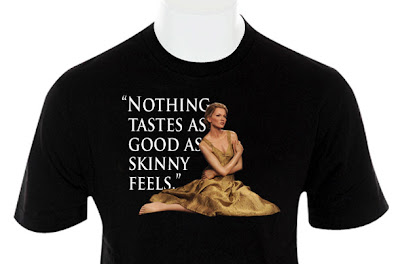 Perez Hilton has pulled his incredibly offensive tee-shirts emblazoned with the phrase, “Nothing tastes as good as skinny feels!” after learning that the saying is a Pro-Ana term, not just something Kate Moss said. Pro-Ana websites claim to be “pro-anorexia” and offer girls “thinspiration” to help them maintain their eating disorders. Often, these sites allow members to post pictures of their emaciated selves, show pictures of skinny models and celebrities, and offer forums to discuss tips for staying deep in their disorder. Pro-Ana and Pro-Mia (bulimia) sites see eating disorders as a way of life and not for what they are: deadly disorders that create a deeply warped sense of reality.
When Perez Hilton first put up the shirts, the site received massive amounts of criticism. It was a prime example of how flippant the celebrity culture within the media has become. Anorexia and bulimia are extremely destructive to the lives of teens and adults and recovery demands that these disorders be taken seriously, not mocked by gossip columnists who make a living making fun of women. People die from eating disorders. Eating disorders in teens are often seen as a symptom of deeper psychological issues. Teen dual diagnosis treatment treats the whole teen. In teen eating disorder treatment, it is believed that by treating the issues that fuel the disorder, the disorder will no longer have a function. Teen eating disorder and dual diagnosis treatment is a necessary part of recovery from an eating disorder. With anorexia and bulimia, the teen’s perspective has been so warped it is necessary for an intensive intervention. Inpatient teen rehab is the best start on the road to long term recovery.