Know Your Facts: The Increase in Prescription Drug Abuse 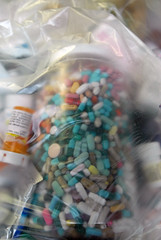 Monitoring the Future released their latest study, noting that alcohol use was down, but marijuana, synthetic marijuana, and prescription drugs were up. In part one of this series, we focused on marijuana and its synthetic counterparts, bringing attention to the
perceived harmlessness of marijuana and the growing trend toward the use of synthetics. Here, we’ll talk about the rampant use of prescription drugs and the myriad dangers which accompany their use.

When it comes to prescription drugs, the ease of acquisition is often as simple as going through a parents’ or relative’s medicine cabinet, raiding a friend’s house, or simply trading with friends at school or at parties. The use of opioid prescriptions like Oxycontin and Vicodin are rampant…and deadly. As reported in Monitoring the Future’s 2010 National Results on Adolescent Drug Use: Overview of Key Findings, “54% of high-school seniors said ‘opioid drugs other than heroin (e.g., Vicodin) would be fairly easy to get.’” Why are teens using prescription drugs with such frequency? Could it simply be the ease with which they’re obtained? Or is it the built-in societal respect for doctors and their judgment which allows us to look away when the pen flies across the prescription pad.

Take note of the behaviors and physical symptoms which surround prescription drug addiction (via Educate Before You Medicate – www.talkaboutrx.org):

Physical Signs and Symptoms (these are varied, depending on the drug being used/abused):

Stimulants can bring about:

Opioids can bring about:

The unfortunate, but common misconception is that prescription drug use is safer than illegal drugs like cocaine and heroin: because it’s been prescribed, it’s “okay.” The problem with this ideology is doctors consistently prescribe and sometimes inadvertently over-prescribe narcotics, A: because they work, and B: because it’s easy. What this influx of prescription drugs does, however, is provide an underground stockpile of prescription opioids in the homes of our adolescents and their friends. As patients, start asking for non-narcotic alternatives. It makes no difference to the doctor but it may make the difference of life and death for you or someone in your family.

Start disposing of any unused medications and store those that are necessary in a secured place. Honestly, these days, the medicine cabinet should probably only be used for toothpaste and Tiger Balm.