In the News: Synthetic Marijuana aka Crazy Clown 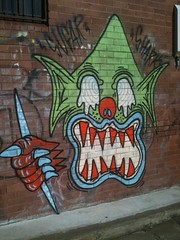 Synthetic Marijuana is back in the news, this time under the names “Crazy Clown” or “Herbal Madness Incense.” Eight teens and young adults were sent to the hospital in Georgia this weekend because of the effects of this drug. The CDC is investigating this latest designer drug incarnation and has issued a warning. The use of synthetic marijuana is incredibly dangerous and presents a growing public health concern. According to the CDC:

“Sixteen cases of synthetic cannabinoid-related acute kidney injury occurred in six states in 2012. Synthetic cannabinoids, which are sold in smoke shops and convenience stores under names like ‘synthetic marijuana,’ ‘Spice,’ ‘K2,’ or ‘herbal incense,’ are designer drugs dissolved in solvent, applied to plant material, and smoked. These psychoactive drugs can have a significant effect on mood or behavior, but also carry the risk of unpredictable toxicity. The growing use of synthetic cannabinoid products is an emerging public health concern. The sixteen cases reported in this study developed kidney damage after smoking synthetic cannabinoid products. In seven of the cases, analyses of the products or blood or urine samples found a unique cannabinoid called XLR-11. These products are often sold as incense and labeled “Not for Human Consumption.” Despite the labeling, individuals use the products as an alternative to marijuana use.  There is a risk that some cannabinoid compounds may be toxic and the health effects may not be easily predictable because of what is still unknown about the products. However, it is important that clinicians, scientists, public health officials, and law enforcement are alerted about the emerging adverse health effects from synthetic drug use.”

Symptoms from the use of this latest version of synthetic marijuana include:

We’ve written about Spice, K2, Cloud Nine, bath salts, and all other incarnations of these designer drugs before. They are enticing, especially to teens and young adults looking for a cheap, quick high.  Because these drugs are easily obtained at liquor stores and convenience marts, their often innocuous packaging makes them seem harmless or just “fun.”

For now, the active ingredient is unknown, but we know that it is highly dangerous. One of the most troublesome issues regarding synthetic marijuana is the ever-changing ingredients: As soon as one ingredient is banned, it morphs into something new, creating a maelstrom of issues for law enforcement, medical professionals, and the CDC. Usually new synthetic marijuana is discovered because of an increase in ER visits. This stuff is lethal. What looks like a cheap, easy high is more often a fast-track ride to the hospital. It’s not worth it.