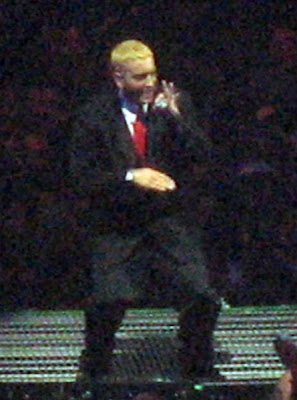 Eminem recently opened up to Vice Magazine, admitting that he used to be heavily addicted to prescription painkillers and sleeping pills. He reported that at times he was taking 10-20 Vicodin a day and so many Valium and Ambien that he couldn’t count them. Again we are reminded of the growing problem of prescription drug addiction. After a nasty relapse following a knee injury, Eminem got clean and stayed clean. In the article, he shares about his initial struggle to write raps sober. He says, “I almost feel like a little kid again with rap. I wanna play around with different flows. If I don’t feel like it’s what I’m fully capable of, if there’s one weak line, I wanna change it. Rap was my drug. It used to get me high and then it stopped getting me high. Then I had to resort to other things to make me feel that… Now rap’s getting me high again.”

Most of the people I know in recovery are highly creative in one form or another. Many addicts in early recovery struggle with the fear that they will not be able to do the creative things that they used to do when they were using. Art therapy is an extremely useful tool in exploring emotions and recovery. I associated painting and drawing with using, and I thought that I wouldn’t be creative anymore without drugs, which is a lie. I felt like art was a best friend that I could never go back to again, and it broke my heart. Recently, I heard a speaker share that as an artist, in order to overcome her challenges with creativity, she had to remember that she was a creative and clean person before she started using, and that she was a creative and clean person now. Art therapy at Visions helped me readjust my perspective regarding art. I began to see it as a useful tool in my recovery. Painting and drawing are now forms of meditation for me, and a way to work out challenging issues. I don’t know what role art will play in my future, but I know that I don’t want to be without my creative outlets.