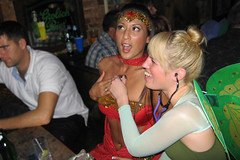 Is your teen playing doctor? Surely, this is an appropriate question for parents of adolescents who are concerned about teens entering a sexually intimate relationship before he or she is ready.

Unfortunately, this is not what I’m addressing. John Lieberman, our Director of Operations sees quite a bit of this and is concerned that “adolescents are literally playing doctor in the worst way, taking both prescribed and over-the-counter medications to treat perceived illnesses and issues.” They are reading information on the Internet, getting advice from peers as to what medications they should take, and they’re often mixing and matching drugs while they’re at it. While some of these Internet sites have some valuable information regarding symptom checks and corresponding information about illnesses, they also present a danger. Any time we look at something from the perception of a layperson, we risk finding and relating to symptoms within the descriptions of many illnesses. That’s what real doctors are for: differentiating reality from the natural misinterpretation from those of us lacking the vital MD title. Pharmaceutical-related overdoses have increased, proving the increasing danger in this behavior, and spurning an all out war against the pharmaceutical industries.

Drugs like Vicodin, Oxycontin, Percocet, and Demoral are all opium derivative drugs. This particular class of drug is highly addictive and can easily lead to an overdose. Xanax, Ativan, Klonopin, Soma, Lunesta and others are benzodiazepines. These, too, can create a physical addiction in a short period of time and in worse cases, cause death. Adderal, Ritalin, and Vyvance are amphetamines primarily used to treat ADHD and are subsequently very powerful drugs that can cause heart attack and stroke, particularly when used inappropriately. The latter are often traded amongst kids in an effort to get high, or even as an attempt to increase their focus at school.

Our kids are playing doctor with quite a varied array of drugs, and this does not take into account the rampant abuse of illicit drugs or alcohol. According to John Lieberman, “Our teens are using very powerful psychoactive drugs during a time in their lives when they are emotionally vulnerable and when their brains are in a major stage of development.” According a 2010 statement by the APA:

“The brain’s frontal lobes, essential for functions such as emotional regulation, planning and organization, continue to develop through adolescence and young adulthood. At this stage, the brain is more vulnerable to the toxic and addictive actions of alcohol and other drugs.”

This isn’t just about playing doctor, kids are also doing chemistry experiments…with their own brains.

This blog was co-written by John Lieberman, our Director of Operations.

Partnership for a Drug Free America