Did Miami’s Michael Beasly Twitter His Way Into Drug Treatment? 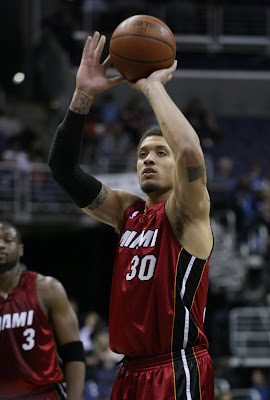 Michael Beasley, star forward of the Miami Heat may have Tweeted his way right into a Houston drug treatment program this weekend following a series of increasingly disturbing tweets on Twitter, a couple of page deletions, and a TwitPic which may or may not show a couple baggies of drugs in the background of the photo. Beasley’s increasingly bizarre posts including things like, “Not feelin’ this at all,” and “Y [sic] do I feel like the whole world is against me?” precluded his admission to the recovery center. He managed to publicize his own breakdown which may have led to pressure from others to get help.
Social networking sites are popular- especially with teens. For whatever reason, it seems like many adolescents are more comfortable letting the entire cyber universe know what’s going on with them than talking to their parents or loved ones. A suspicious posting on a blog, Twitter, Facebook, or Myspace can be a cry for help that parents may not hear. My Myspace site was covered in suggestive drug slang and hints at self injury when I was using. After my behavior changed, my parents decided to check out what I was up to online. I was so mad at the time, and felt like my privacy was being invaded, but now I know it was for my own sake. After seeing the kinds of things I was putting out into cyberspace, my parents sat me down for a long talk, which led us to the decision to try adolescent drug treatment. It’s a difficult thing, to ask for help, and the process was definitely a struggle for everyone at times, but it was so worth it. I hope that Michael Beasley finds the help he is looking for, and that anyone who needs help finds it. If you feel that your teen may be struggling with drug or alcohol dependency, help is here.