Cutting is back in the spotlight after a study by TheJournal of the American Academy of Pediatrics brought attention to the high numbers of YouTube videos showing teens and young adults exhibiting self-harming behaviors. By 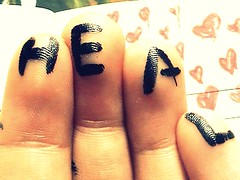 “The top 100 videos analyzed were viewed over 2 million times, and most (80%) were accessible to a general audience. Viewers rated the videos positively (M = 4.61; SD: 0.61 out of 5.0) and selected videos as a favorite over 12 000 times. The videos’ tones were largely factual or educational (53%) or melancholic (51%). Explicit imagery of self-injury was common. Specifically, 90% of noncharacter videos had nonsuicidal self-injury photographs, whereas 28% of character videos had in-action nonsuicidal self-injury. For both, cutting was the most common method. Many videos (58%) do not warn about this content.”

Researchers worry that these videos might lead to a normative view of cutting and self-harming. As one who self-harmed for years (even into my sobriety), my concern isn’t whether or not this will be viewed as normal, but rather, is anyone taking action and listening to this loud cry for help?
It’s not fun to self-harm. It isn’t a source of pride. It’s not something you share with those around you. It’s not something you do to feel “a part of” or to be “cool.” For me, it was something I did to actually feel because I was so numbed out. In the flash of the adrenaline rush, I felt alive and present when I self-harmed. I felt like it was the only way to feel “real” in my otherwise surreal life. I also felt immediate and devastating shame. It was scary. It was embarrassing. Having to explain abhorent injuries to the curious when the perpetrator is you is nightmarish.
Getting help took an act of bravery on my part. I had to tell someone. I had to talk about it…openly. I had to face my shame and fear so I could transform it into something positive. I had to do some deep, spiritual work in order to learn how to turn self-harm into self-care. I continue to do this work, so I can  revel in self-care and be of service to others. I had to build a fellowship of support that would be there if I slipped back. I empathize for the kids on YouTube. I hope someone reaches out the hand of recovery and lets them know they don’t have to hurt like that anymore.