Bullies: Not My Child! 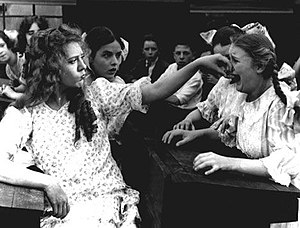 In today’s seemingly accepting society, why does bullying continue to be such a terrible epidemic? Why are gay teens still heavily targeted by kids in schools and social settings? And why are kids who are outside of the normative pop-culture box automatically seen as gay or weird? I see this behavior even at the elementary school level, where the biggest insult a child can throw at someone they don’t like is a gay slur. We have a problem–one that’s resulted in numerous suicides by teens breaking under the pressure of needless harassment and hatred.

Schools have anti-bullying programs in full effect, and in many ways, they are effective in eliminating the acute bullying attacks that kids experience. What is missing, however, is a way for kids to deal with the subtle bullying that continues to happen in the hallways and playgrounds. For instance, a child that alerts an authority will often fall subject to additional bullying for “telling,” enduring the continuation of threats and shaming albeit in subversive and low whispers. This goes on to create an intensely hostile environment for the victim and those who witness this behavior. I worry that the gap between the administration and hallway socialization is ultimately pushing bullying underground.
“When children feel threatened, they cannot learn,” says Arne Duncan U.S. Education Secretary. Time and time again we see a bullied child revert inward to escape the emotional trauma induced by bullying antics, leaving things like school work on the wayside. Honestly, fractions become banal when one’s fighting for their survival on the social level.

Remember, an act of bullying can fall into any of these categories, be it in one area, or several.

And the BULLY may:

Where the concern lies mostly in helping the bullied, and punishing the bully, it helps to remember that the latter is suffering as well. What makes a bully is often times another bully. It’s important that in our ardent efforts to heal the effects of bullying, we don’t forget to examine the cause. If you discover that your child is the bully, get them help. Find out the cause of their violence and do something about it.

Bullying impacts everyone: the bullied, the bully, and the witness. No one gets out unscathed.

Get into ACTION:
Challenge Day (www.challengeday.org)