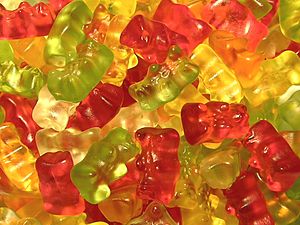 You know things are desperate when you start soaking innocent gummy bears in…vodka. The Fix posted something about this a little over a week ago, and I’ve been sitting on it for fear that it could encourage kids NOT in the know to experiment. Frankly, it also reminds me of the absurd vodka eyeballing trend we wrote about last year. Really, what it shows is the obvious desperation that occurs when we want to get loaded, and the seemingly insane steps one is willing to take to make it happen.

It’s the true nature of adolescence to experiment, and holy heck are they creative about the way they do it. Who else would come up with soaking gummy bears in vodka or pouring vodka directly into their eyes? Think about it, no adult in their right mind is going to check their kid’s gummy bears (well, they might now.). But aside from the clandestine nature of getting drunk this way, there is certainly a clear danger. While a handful of these cute, sweet, sugary bears can get you loaded, there’s no telling how much alcohol you’re actually ingesting. Just because it’s small, doesn’t mean it’s safe.

If you’re concerned about your teen, and noticing signs of secretive behavior, then it’s likely you need to start looking beyond the obvious. Adolescents, beyond all of their bluster and displays of parental revulsion, are actually crying out for help when they behave like this. As parents, it’s our job to toughen our resolve and learn to take things less personally so we can provide the help that’s needed. No one wants to live uncomfortably in their skin, even sugared up on “boozy bears.”