Bath Salts: Not For Your Average Soak

Either addicts are getting more creative or illicit drugs are being used to make run-of-the mill products, either way, the new drug being marketed under the moniker “bath salts” is disturbing at best. These “bath salts” are legally sold at head shops, convenience stores (I swear, they’ve gotten more and more risque with their last-minute “must-haves” sold at the counter!), and of course, on the street. Honestly, when I saw the news articles on this earlier this month, I thought it must be a farce. It’s not. In Michigan alone, at least 18 adults went to the ER after using this drug! 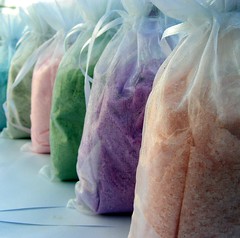 So, what are bath salts? Well, they aren’t the common salts you find in Bed, Bath, and Beyond, that’s for sure. Rather, these are marketed under names like “Ivory Wave,” “Aura,” “Zoom 2,” “Zeus 2,” “Cosmic Blast,” and “White Rush” and sold off the beaten path, no questions asked. These designer bath salts contain a synthetic chemical called Methylmethcathinone or Methylenedioxypyrovalerone (MDVP). Essentially, what you get is a powerful high with a simultaneous period of psychosis, coupled with an insatiable craving for more.

“Bath salts” produce effects similar to Ritalin when taken in small doses or cocaine if taken in larger doses. The effects of this drug can cause an increase in heart rate, chest pains, dizziness, delusions, panic attacks, nose bleeds, and nausea. And then there’s the hallucinations, which are rumored to be terrifying. Not terrifying enough, though, because apparently the pull of the drug is such that the user clamors for more despite their negative experience while under its influence.
Being a new designer drug, all the physical warning signs aren’t known yet, but since it’s not dissimilar to amphetamine and hallucinogenic use, I would suggest keeping your eyes peeled for similar erratic behaviors such as paranoia, weight loss, dilated pupils, and of course, the ubiquitous small plastic baggies.