Adolescent Self Harm, Depression and addiction 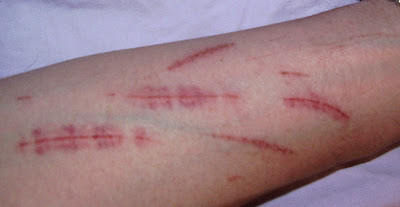 When I was using, I resigned myself to the idea that I was just crazy. My behavior certainly made it appear that way. My self-harming behaviors and bouts of extreme depression landed me in more than one psych ward before I went to residential treatment in Malibu. I remember sitting in the hospital one time, surrounded by doctors asking me, “What happened to you? Why are you like this?” I thought I was destined to be crazy. I never considered that drugs might be contributing to my growing mental instability and depression. I never considered that because I was constantly using and not being honest with doctors that I was making it impossible for them to give me a clear diagnosis and treatment. One day a Hospitals and Institutions (H&I) panel from Narcotics Anonymous came to the hospital. The H&I panel members were volunteers from NA who had brought a meeting in to us, since we couldn’t leave. Even though they were much older than me, I identified with the feelings they talked about, and the unreasonable compulsion to use drugs and alcohol. They had had that same kind of “crazy” that no one could put their finger on. They were addicts, and I was an addict. I was a teenage drug addict? I felt like I should have had my own Lifetime movie or after school special in order to be classified a teenage drug addict. It was a heavy moment for me when I realized that drugs and alcohol might be the culprits behind my steady decline, and that I had to use drugs, even when I didn’t want to. I took it in as something to consider.

Following the hospital stays, I began my attempts at sobriety, finally ending up in residential treatment. As I stayed clean and began to work the 12 steps with my sponsor and work more closely with the counseling staff at the rehab, I began to see myself kind of “level out.” In early recovery, my reactions to discomfort were rather volatile, but as I developed new behaviors to replace my old, destructive behaviors, I began to feel my insanity lift. Who’da thunk it, that taking away the drugs and alcohol and lunatic drama that was my life in Santa Monica would make me feel less crazy? The structure in treatment and the life that followed in outpatient and sober living was key in maintaining and developing my mental stability. My newly developed tools were best practiced in safe environments for awhile. After developing such a strong foundation, I have been able to take my skills into the world with me. In treatment I learned how to ask for help and worry about saving myself before saving face. I learned how to think before I speak and react. I learned anger management tools and practical application of the 12 steps. I learned how to show up even when I don’t feel like it. When I walked out of the doors of Visions, I walked a out a completely different person than the fearful, depressed person that walked in.

Adolescent Self Harm, Depression and addiction