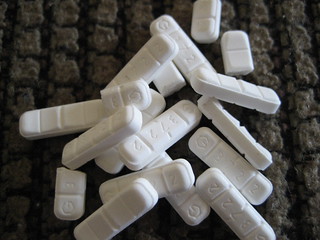 Administration), there has been an increase in ER visits due to the recreational use of alprazolam, commonly known as Xanax.  Per the report, “The number of emergency department visits involving non-medical use of the sedative alprazolam (Xanax) doubled from 57, 419 to 124, 902 from 2005 to 2010, and then remained stable at 123, 744 in 2011.”

Xanax is part of a class of medications called benxodiazapenes and is indicated for the treatment of anxiety disorders. Benzodiazepenes work on the brain and the nerves – our central nervous system – producing a calming effect.  Benzodiazepenes enhance a chemical, which is naturally found in the body called GABA (gamma-Aminobutyric acid), which plays a role in regulating the nervous system.

It’s noted that Xanax is often one of the first pharmaceutical interventions given to someone struggling with anxiety or panic attacks. In fact, “Alprazolam is the 13th most commonly sold medication in 2012, and is the psychiatric medication most commonly prescribed in 2011.”

While Xanax may be effective when used appropriately for anxiety and panic disorders, it is profoundly dangerous when used recreationally. It is highly addictive and often encourages drug-seeking behavior. SAMSHA reports, “The non-medical use of alprazolam can lead to physical dependence, causing withdrawal symptoms such as tremors and seizures.  If alprazolam is combined with alcohol or other drugs that depress the central nervous system — such as narcotic pain relievers — the effects of these drugs on the body can be dangerously enhanced.”

The side effects of Xanax (alprazolam) include:

According to the SAMHSA study, “In 2011, there were over 1, 200, 000 emergency department visits” as a result of recreational prescription drug use. Often times, recreational users mix several types of prescription drugs or add alcohol, creating a chemical mash-up. How these drugs are acquired is also a problem. It’s not uncommon to procure them from the medicine cabinets of parents, or parents of friends. This fact alone is a reminder for parents to lock away medications that present a danger and get rid of unused medications they have lying around the house. Keep in mind, expiration dates are a non-factor to a teen looking to get high and the reality is, all drugs not currently being used need to be viewed as dangerous.

The SAMSHA study acts as a reminder to pay closer attention to our children, and to take responsibility for the medications we have on hand. Adolescence breeds curiosity and is fraught with risk-taking behavior. What’s normal can very quickly go rogue. A child’s curiosity coupled with a genetic propensity for addiction is dangerous; likewise, a child’s curiosity coupled with a lack of impulse control (normal) and a rapidly developing brain (normal) is also dangerous. There is no “safe” curiosity when it comes to drugs. And misusing prescription drugs is not an exception.