The Skinny on Heroin: Cheap, Accessible and Deadly

The media is calling Heroin the “silent assassin,” 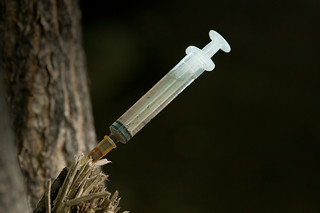 and many are  saying there’s a Heroin epidemic, mostly because of the recent celebrity overdoses and increase in heroin deaths across the country.  The latest celebrity death of Phillip Seymour Hoffman seemed to really strike a nerve. Is it because he was clean for a long period of time, openly talking about his troubles with addiction? Or is it because he’s someone we as an audience want or need to respect because of his wide range of talent? It’s a loss, a great one, but it is more a reminder of the devastation drug use can cause.

The use of heroin is prime for a death sentence and its inexpensive procurement makes it an easier and more desirable go-to than drugs like Oxycontin, particularly if you are young, desperate, and broke. At the same time, for celebrities like Hoffman or Cory Monteith, familiarity may be the calling card.

According to the National Institute of Drug Abuse (NIDA), “Prescription opioid pain medications such as Oxycontin and Vicodin can have effects similar to heroin when taken in doses or in ways other than prescribed, and they are currently among the most commonly abused drugs in the United States. Research now suggests that abuse of these drugs may open the door to heroin abuse.”

And according to a 2012 Monitoring the Future study (a NIDA funded survey of teens in grades 8, 10, and 12, only 0.05% of 8th graders, 0.6% of 10th graders and 12th graders reported using heroin at least once in the past year. The number of teens using heroin is down significantly to what it was in the 1990s. The main concern now is that teens addicted to prescription opiods like Oxycontin will eventually turn to heroin because of its low cost.

Concerned about your teen or young adult? Here are some signs to look for:

Talking to someone who has a drug problem isn’t always easy, in fact, it can be down right difficult. You may encounter denial, anger, frustration, sadness, regret, and you may face a litany of excuses. Regardless, encourage your friend or loved one to talk to a counselor or a teacher, or trusted adult. Be kind and encouraging and make sure you are also getting the support you need. Reaching out to a friend or loved one lost in the throes of their addiction can be overwhelming and deeply upsetting. Make sure you also have resources you need to decompress and ground yourself: a therapist, AlAnon, CoDA, or a space or practice that you can lean into to take care of yourself.

Check out NIDA for more information on heroin.

Help is just a phone call or email away. Contact us with any questions or concerns.