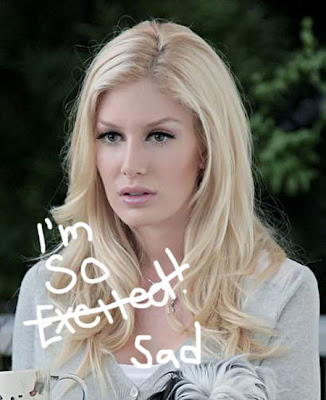 Heidi Montag of the Hills recently exposed her obsession with plastic surgery and looking as perfect as possible to People Magazine. Montag received ten different procedures in ten hours, including an eyebrow lift, botox, liposuction on her stomach, neck and thighs, another breast augmentation, nose job revision, ears pinned back, chin reduction, and a buttock augmentation. She is 23 and barely recognizable. She claims that in order to feel best about herself, and to feel beautiful as a woman, this is what she needs to do.
I could go on and on about the pressures (especially in Los Angeles) on women to feel bad about their bodies. Montag may very well be an example of this. In teen drug and eating disorder rehab, I was confronted with my own body image issues. By taking the drugs away, which I had used for years to mask my insecurities, I was forced to deal with my issues head-on. I understand Montag’s desire to feel perfect and desirable, but fortunately I have obtained some level of sanity in that department. It is easy to think that, “If only I had bigger breasts, a smaller stomach, or a smaller chin, I would feel better all of the time,” but rehab gave me a dose of reality. There is nothing on the outside that can change my insides. Recover love myself no matter what my outsides look like.