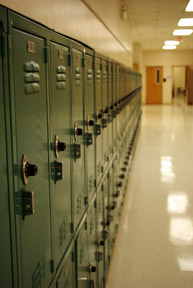 So, what do happens now that school has started? You have new rules to follow, sobriety, a different outlook on life, and now you find yourself back in the thick of things. How will you be perceived at school? Will people hate you, judge you, still want to talk to you? Will your teachers “know” that you are in recovery? Will they even care if they do know? And what about your classmates? Will you be an outcast or will you make new friends? These may be some of the thoughts going through your mind in this season of change, particularly since school and peer pressure may have been the playing field for many of the poor choices, risky behaviors, and questionable friends surrounding you in your days of using. It makes sense reentering that environment might stir things up, but you’re a different person now.
When I was in junior high school and part of the “stoner” crowd, there were two guys in particular that were popular and always the center of whatever was going on. One day, they weren’t there anymore and when they returned, a few months later, they were both sober, bright eyed, healthy, and well, significantly different from the last time any of us had seen them. They were notably active in their recovery without being preachy–in a nutshell, they were passionate about being sober, and confident they were on the right path. They weren’t shy about their problems or where they’d been; they didn’t avoid their friends, instead, they became catalysts for change. I was always impressed with how these young men took something often deemed stigmatizing and made it safe and acceptable to talk about. As a result, I’ve carried that ideology with me into my own sobriety.
For some, this year will be about finishing high school, for others, it’ll be the great jump into college: Either way, doing it all sober means you get to be present–what a tremendous blessing that is! Try to remember, sobriety doesn’t mean you’re weird, rather, it offers you the ability to change and is ultimately transformative. So, get involved, be of service, participate in your recovery with the fervor you had when you were drinking and using. Find meetings geared toward young people–trust me they’re out there! And if you live in an area where young peoples AA is lacking, start a group!

Feel free to comment and share your experience, strength, and hope with us. We look forward to it!