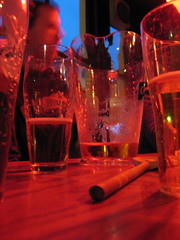 For teens, their peers are their greatest social influence, particularly when it comes to experimenting with alcohol, etc. When they enter middle school, and find themselves in the hands of new school corridors and playgrounds, a child’s socialization center changes. No longer are their parents directly involved at school and for the first time, our kids are relatively on their own. While the norms and values learned in the home are still valid, applicable and deeply planted, the  heady influence of peer groups, the need to fit in, and the general desire for social acceptability often attempt to nullify these base values. Peer influence becomes as distinctly influential as that of parents. The irony is, this is normal social behavior.
Studies and research are beginning to talk about how parenting styles can influence how a teen drinks. Stephen Bahr, a professor of sociology at BYU, along with some colleagues, took a look at how teens are using alcohol. They noticed a pattern in drinking behaviors as associated with different parenting styles, particularly the rigid approach vs. one that’s casual. In their 5000-person survey, Behr found that kids hailing from laisez-faire, indulgent parents where consequences were rarely doled out  were “3 times more likely to binge drink,” and at the other extreme, kids raised in overly strict environments were also more likely to binge drink. According to Bahr, “Kids in that (the strict) environment tend not to internalize the values and understand why they should not drink.” When the boundaries are too rigid, one’s ability to make self-directed judgment calls becomes limited, at the same time, kids with little to no boundaries suffer from a lack of a true moral compass, making loose decision-making skills the norm. Essentially, the study shows both extremes have negative consequences. Bahr also states, “While parents didn’t have much of an effect on whether their teens tried alcohol, they can have a significant impact on the more dangerous type of drinking”
How can we do this? Research shows we need to begin by borrowing elements from each of the two parenting styles, creating a style based on balance. Essentially, recognize your kids when they’ve done something positive, but hold the line, maintaining a firm boundary when they go off track. We know there are many components involved in teenage drinking: some may simply be genes, in which case, parental transparency is invaluable; it could be a particular group of friends one’s associating with; it could even be turmoil in the home, creating a sense of emotional isolation for our teen. For starters, begin talking to your kids about alcohol and drugs, even as early as the 4th grade. They aren’t too young to know, and frankly, it’s best if it comes from you, dear reader, than the renegade ideology of a misguided friend.