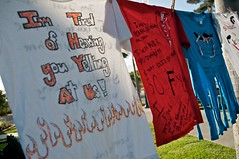 Domestic violence doesn’t play the race card, class card, or age card–it has no boundaries: it thrives on dominance and control. In teens, it’s referred to as dating violence, a type of intimate partner violence, wherein a partner is pinched, hit, shoved, or kicked; they are often shamed, called names, bullied, embarrassed with intent, and isolated from friends and family; they are sometimes forced to engage in non-consensual sex. When started early in one’s life, these relationships can lead to a pattern of abuse as they grow older. If intimacy is learned through violence and fear, then violence and fear become the normative behavior, making healthy interactions seem foreign and perhaps even uncomfortable. Sometimes the initial teasing and name-calling that occur are considered normal, but often times, they are just the opening act leading to more serious violence like battering and/or rape.

This is a serious issue, but sadly, teens don’t usually report dating violence for fear of what friends or family may think. The fact is, it’s happening with more and more frequency, and to more people than we care to admit. These statistics from the CDCspeak volumes:

According to the US Department of Justice, “Females ages 16-24 are more vulnerable to intimate partner violence than any other age group,” and according to the Empower Program, sponsored by Liz Claiborne, “A majority of parents (54%) admit they’ve not spoken to their child about dating violence.” So, while this behavior is often recognized (and yet ignored) amongst teens, the parental knowledge base seems scanty at best. Parents are afraid to talk about it, and kids are afraid to go to their parents; that’s a double-negative detrimental to affecting change of any kind, now isn’t it! The CDC lists warning signs for someone at risk for using dating violence–recognizing these signs early may help stop the cycle of abuse before it can start:

Other things we can do is foster positive, healthy relationships with our children, model loving behavior in the home, and talk about what’s going on with our kids or within the community regarding violence, even if it’s scary! Because if we don’t talk about it, our kids are ultimately at risk for trying to “fix” their problem with things like drugs and alcohol, and that’s just going to create another layer of dysfunctionality, opening more doors for despair to flourish.