Rest Your Thumbs: Communication Without Texting 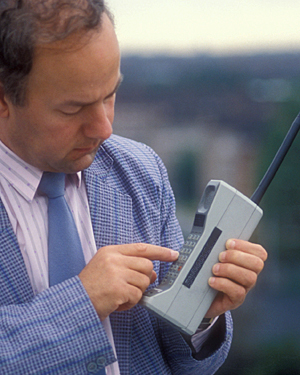 When I was a teen, a computer was something only geeks or millionaires had; cell phones were something futuristic and reminiscent of the 80’s show Hart to Hart

and their “fancy” car phones. So when the first phones came on the scene back in 1983, coined The Brick, and weighing in at two pounds with a mere half-hour of talk time, the collective response was amazement. The price tag was hefty, which raised its status, making it all the more desirable and of course, cool. There were even rap songs about the Brick! Realistically, if you had one at that time, they served no other purpose than for social status and of course, “emergency” phone calls. The Brick couldn’t do much more than make a phone call anyway.

In 2012, we now have miniature tools of technological genius, which allow for us to communicate via text messaging, voice, email, and various social-media outlets via a host of apps. What we’ve ended up with are varying forms of non-confrontational and non-contiguous means of communication. This type of communication works for many people, especially when one considers the amount of multi-tasking we do these days. Unfortunately, texting has evolved and become the primary form of communication for many, particularly teens, whose need to stay connected socially is often a key component to their social survival. Let’s face it, it’s far less scary to test the waters of a burgeoning relationship via text than it is in person. The trouble with this is two-fold:  texting lacks sincerity, and it lacks accountability – two things which are crucial in building the bedrock meaningful friendships and relationships are based upon. The non-contiguous factor also has its positives and negatives: you can share a nugget of information that’s not time sensitive, therefore not requiring immediate response. But you can also say things you’d never say in a million years to someone’s face and “walk” away.

This comment, “Words are bullets,” which I once heard in a meeting seems to really ring true in the case of text messages and digital communication. In this sense, a text can be like a virtual Uzi. I’ve experienced this phenomenon myself, where I’ve received a nasty message via text but upon direct confrontation, I was met with sheer nervousness, darting eyes, and denial. What’s concerning is the deterioration of our communication skills, particularly amongst adolescents. As a culture, we’ve gotten lazy when it comes to expressing ourselves, though our thumbs might disagree.

My own goal this year is to minimize the use of texting as a primary form of communication. I’ve been successful thus far, and have experienced more meaningful conversations with people. Try this: put your phone away for a prescribed period of time. If you need to tell someone something, pick up the phone!  You might be amazed how the quality of your ensuing conversations increases. I know I did, and I multi-task with the best of them.