At Death’s Door: An Overdosing “Epidemic” 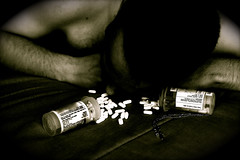 According to preliminary data from the U.S. Centers for Disease Control and Prevention(CDC), “Drugs exceeded motor vehicle accidents as a cause of death in 2009, killing at least 37,485 people nationwide.”

What we have is a growing epidemic of pharmaceutical overdoses, where the age of users and overdose victims vary from teens trying to achieve a heroin-like high to adults attempting to manage a slipped disc, or other painful injury. Some of the most commonly abused drugs are OxyContin, Vicodin, Xanax and Soma, but I would be remiss if I didn’t mention Fentanyl, a relative newcomer, but a dangerous one nonetheless. Fentanyl’s allure is its heroin-like high along with its unassuming portability: it comes in the form of lollypops and patches and packs a punch 100 times harder than morphine. It’s drugs like these which are responsible for more deaths than heroin and cocaine combined.

According to a recent CDC report, “3% of physicians accounted for 62% of the OPR (Opiod Pain Relievers) prescribed.” Still, there are many doctors voicing concern about this very issue. There is legitimate concern regarding prescriptions being handed out without sufficient evaluations or follow-ups. We see a lot of this in the often illegitimate pain clinics (pill-mills), who provide easy access to patients and don’t question the potentiality of doctor shopping. Still, it would benefit more physicians to become more judicious with their prescription pads and in the practice of writing a 3-day prescription rather than the ubiquitous 30-day bucket of pain meds, at least for those dealing with acute pain. So far, 48 states have instituted Prescription Drug Management Programs (PDMPs) that will flag doctors who have profiles of heavy prescribing and use. This may some of the problems, but I fear it may also marginalize those who actually need to take pain medications to manage chronic pain issues. According to CDC director Thomas Frieden, they “are still figuring out how to use them (PDMP laws) effectively.” At this point, PDMPs only provide monitoring for physicians and their patients. What they do not monitor is the fact that “seven out of 10 medication abusers get their drugs from friends and family.”

Which brings us to the other issue here, which lies in our homes, hanging out in our medicine cabinets

. Gil Kerlikowske, the director of the White

House Office of National Drug Control Policy says, “As much of 40% of all prescription drugs go unused.” Think that sounds like a lot? Check your medicine cabinets—there’s more than likely something there from some old root canal or surgery you had. As parents, we need to take stock and inventory those medicine cabinets. Safely dispose of what you don’t need and lock up the prescriptions you do need. This not only safeguards our kids, it also eases our own temptation to take an unprescribed medication for our own relief or pleasure. Our kids look to us for guidance. We are their first role models, and if we teach them that medication is their go-to release valve, then the natural byproduct is a lesson in numbing out. Use this as an opportunity to talk to your burgeoning adult about healthier ways in which to manage discomfort. Your kids’ lives are worth it.

Articles linked to and used as reference: