Amy Winehouse’s Father Once Faked A Heart Attack In London 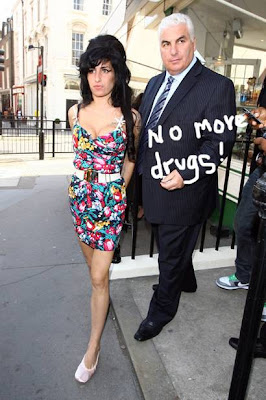 Amy Winehouse’s celebrity father is reporting that he once faked a heart attack in order to scare his daughter into getting clean. Obviously, the plan was not a success. The thing with using addicts is that we rarely have the ability to care for anyone but ourselves. It’s an enormously self-centered disease and I can recall wanting to care, but being unable to do anything but feed my drug and alcohol habit. Her father seems to be encouraged that Winehouse has replaced drugs with alcohol, but as a recovering addict, I can say that replacing one drug with another is simply prolonging the process.
In an effort to get off of “hard drugs,” I attempted to try drinking instead of using. It was probably one of the more disgusting periods in my using history. I still sought escape and obliteration, and had no ability to stop- no matter what I was using. It wasn’t until I was able to maintain total abstinence from all drugs, including alcohol, that I was able to deal with the core of my problem- me!
drug and alcohol treatment gave me a chance to be completely removed from my environment, which I feel was necessary for me. I was incapable of maintaining my resolve long enough to kick drugs on my own. Being separated from my old environment and old friends gave me some space to really look at my life honestly. In drug treatment, I was able to look at the disease of addiction in its entirety and how it was destroying my life and devastating my family. Once the fog of drug and alcohol use lifted, I was horrified to realize what I had become. In the compassionate world a good treatment center, I was able to process these feelings and was guided into a new way of thinking and approaching life. Appropriate behavior was expected of me, and in embracing the program’s structure actually helped me to find freedom, which seemed counterintuitive to me at the time.
Watching Winehouse in the media is like watching an awful train wreck in slow motion. I hope for her sake that something derails her from her destructive path before something truly terrible happens. It makes me sad because I know that recovery is possible for those that can make the effort. When my parents dragged me kicking and screaming to adolescent treatment, I thought it was the ultimate betrayal. Now, I see that their unwillingness to enable me further is what actually saved my life. Perhaps instead of faking heart attacks and encouraging her drinking, Amy’s father might consider refusing to participate in her insanity anymore. Now that I have found the gift of recovery through, I just hope that others can get this chance too.