Are We Quicker to Judge Than We Are to Love? 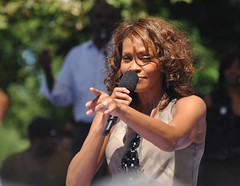 I wasn’t planning on writing about the death of Whitney Houston, because I try not to saddle up to the hyperbole surrounding celebrity and their downfalls. However, as news of her death began to unfold, what I noticed wasn’t kindness or compassion in the public’s reaction and commentary, but an uncensored, callous backlash referencing her addiction. Mind you, the cause of her death is purely speculative at this point–the negative comments began without evidence of an overdose or confirmation from the medical examiner. Makes me wonder, would this commentary be the same if she’d had cancer? I don’t think so. Why? Because cancer is a disease without stigma.

Addiction is just that: a disease. When we talk about diseases, we talk about things we can understand: cancer, diabetes, heart disease, and so on. But when addiction is spoken of, it’s often considered a poor choice someone is making. No one consciously chooses to become an addict. Addiction is a disease, just like any other, but unfortunately, it comes with the stigma of oft-repeated failures and sullied reputations.

What I’m talking about isn’t really Whitney Houston and the tragedy of her death, but about addiction and recovery and all of the mixed-up perceptions that come along with it. Can we, with all of our amends and life changes recreate our image in the public sphere? What about the private sphere?  Or will we always remain the person who “can’t make a good choice.” In cases like this, it would appear that no matter what we do in our recovery, no matter how long we stay clean and sober, if something goes wrong, drugs and alcohol are the first accusations that come to mind. But I call foul, because I know far too many people with long-term recovery who have turned their lives around and become outstanding, respectable human beings.

Addiction doesn’t give a hoot if you’re rich, poor, famous, infamous, fat, thin, talented, ugly or beautiful; all it cares about is sinking its hooks into you. Where addiction differs from other diseases is in its effect on those who come in contact with it: families, friends, classmates, teachers, fans, or the cat pouring your coffee at Starbucks. There’s no doubt it’s a selfish disease, but it still requires compassion and kindness. When I first got sober, I was a bit screwball—my sober big brother loves to tell people I was feral—but ultimately, the thing that kept me coming back wasn’t judgment, it was kindness. When I heard “Let us love you until you can learn to love yourself,” I thought it was hokey. But you know what? It worked a hell of a lot better than damnation and shame.

So, whatever took Whitney, be it drugs or some anomaly with her health, perhaps we should honor her for the woman and legend she was rather than berate her with misunderstood perceptions of a disease. Reverend Al Sharpton echoed this sentiment when he said, “Don’t remember the rumors. Remember the voice God gave this lady and she gave that voice to the world. (She) was an international icon. Whatever she did was on the front page. Don’t delve in the mess. All of us have some mess.”

Remember, though our past may have influenced the way we see the world, it does not define us unless we allow it to do so. In recovery, we do have a choice: we can choose how we interact with the world and how we engage in the present.

Love this from Voice in Recovery: Whitney Houston’s Death and Addiction Stigma